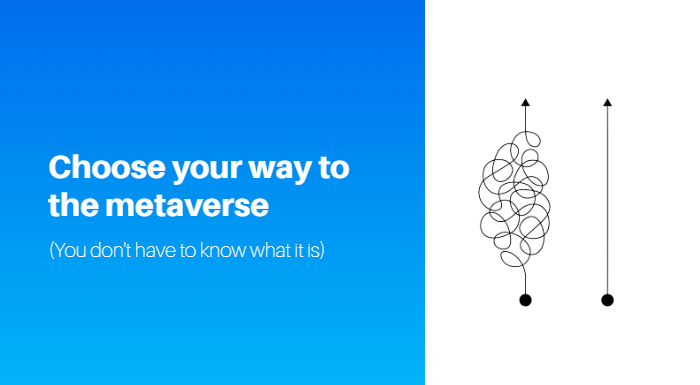 We’re all AR babies: How do we educate the public to interact with virtual objects?

Many technologists agree that Augmented Reality (AR) and Virtual Reality (VR) are the future, but it seems that the public hasn’t received the memo yet.

Because of how rapidly the technology has matured, Gartner actually removed AR from its Emerging Technology Hype Cycle back in late 2019, a sign that they believe the future is now for AR.

Welcome to the metaverse

But last week, even Tim Cook, Apple’s CEO, who since 2016 persistently released optimistic predictions about AR, admitted that the way is long.

“We are really going to look back and think about how we once lived without augmented reality,” he said in an interview with the Dutch news outlet Bright, and then added somberly: “I’m really not sure the average person can tell you what the metaverse is.”

He’s right. As reported in MarketingDive, Wunderman Thompson’s recent “Into the Metaverse” global survey found that only 38% of consumers had heard of the metaverse.

Augmented reality is an entirely new medium that requires a different understanding of the space around us, as well as new ways of conceptualizing ideas, and new gestures to present them.

Some AR also requires a different physical setup, with complicated and expensive specialized equipment, which has kept it out of reach for many people. But you may have experienced AR already through simple AR-enabled apps like Snapchat filters or Pokémon Go.

And like awkward toddlers, some AR-newbies have left a costly path of destruction in their wake as they try to adapt to a new way of interacting in and with the merged physical and virtual worlds.

So despite some obstacles, why will augmented reality become an increasingly common aspect of so many experiences in our personal and business lives?

It’s because augmented reality simply grabs and holds your attention like nothing else. In fact, research has shown that AR presentations are 3x more engaging than traditional slideshows and AR experiences are 70% more memorable.

And what marketing, sales or training professional doesn’t want their presentations to be exciting, memorable and impactful?

At Arti, two decisions that we made at an early stage helped us to tackle the public lack of knowledge about AR, while being the first to migrate virtual presentations into the augmented reality space:

We didn’t want our users burdened by immature technologies and entangled with expensive equipment, such as AR glasses. From day one, we decided that Arti’s SaaS platform would run using only a camera and a laptop, making our solution accessible to mainstream users, and their audiences, immediately.

To avoid misunderstandings and make the process seamless, Arti AR‘s UI is similar to how you created slideshows on legacy platforms. You still create slides, choose graphs and objects from a library, and customize them. The only difference is the outcome: instead of a flat 2D presentation, you get an augmented reality show with 3D objects surrounding the presenter.

Thanks to these two decisions, today, creating an AR presentation is easy-peasy—and both presenters and audiences don’t need more than a few seconds to understand and experience the process.

You can see amazing examples of content created with Arti AR on our YouTube channel. While you’re there, be sure to check out our tips and tricks for effective AR storytelling.

This website uses cookies to improve your experience while you navigate through the website. Out of these, the cookies that are categorized as necessary are stored on your browser as they are essential for the working of basic functionalities of the website. We also use third-party cookies that help us analyze and understand how you use this website. These cookies will be stored in your browser only with your consent. You also have the option to opt-out of these cookies. But opting out of some of these cookies may affect your browsing experience.
Necessary Always Enabled
Necessary cookies are absolutely essential for the website to function properly. This category only includes cookies that ensures basic functionalities and security features of the website. These cookies do not store any personal information.
Non-necessary
Any cookies that may not be particularly necessary for the website to function and is used specifically to collect user personal data via analytics, ads, other embedded contents are termed as non-necessary cookies. It is mandatory to procure user consent prior to running these cookies on your website.
SAVE & ACCEPT
Skip to content